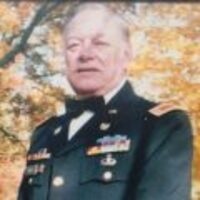 Warren Doyle Evans age 86 of Clarksville, passed away on Sunday July 29, 2018 at Tennova Healthcare in Clarksville. He was born August 17, 1931 in Richland County, Arkansas, the son of the late Hubert Doyle Evans and Thelma Lawson Evans. Warren served in the 187th Airborne Regimental Combat Team during the Korean War from 1951-1953 where he received the Bronze Star for valor. He also served two tours in Vietnam where he received Bronze Stars for Meritorious Service in each tour. He was a lifetime member of the National Military Officers Association and the Veterans of Foreign Wars. He was also a lifetime member of the 187th ARCT organization. He previously served two terms as president and 17 years as treasurer of the Military Officers Associaton's local chapter. He had also been a member of the Bethel United Methodist Church since 1956 and was awarded the honor of Kentucky Colonel. In his free time, Warren enjoyed traveling, playing pinochle at the senior citizens center and walking his dog Jinny. Following his time in the military, Warren worked for 30 years as the owner and operator of Evans Home Repair. During that time he made many improvements for Byers and Harvey properties as well as for many people in Clarksville. He is survived by his loving wife of 63 years, Nancy Cox Evans, a son Mark Evans of Spokane, WA, daughters Dianne Evans of Southside, TN, and Teresa Evans of Clarksville. He is also survived by grandchildren Jennifer Evans, Travis Evans, Rebecca Evans, Joshua Evans, Joanna Katz, Chelsea Evans, Angeleah Evans and five great grandchildren. In addition to his parents, Warren is preceded in death by sons Dean A. Evans and Bruce E. Evans. There will be a memorial service conducted on Saturday August 4, 2018 at 2:00 P.M. at the New Providence United Methodist Church at 1317 Ft. Campbell Blvd, Clarksville with Dr. Apelu Poe officiating. Visitation will be for the hour prior to services at the church. Arrangements are under the care of Gateway Funeral Home and Cremation Center 335 Franklin Street Clarksville, TN 37040. Phone 931-919-2600. Online condolences may be made by going to www.gatewayfh.com.

To order memorial trees or send flowers to the family in memory of Warren Doyle Evans, please visit our flower store.