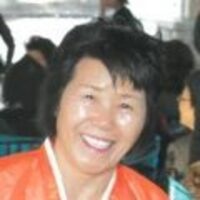 Tuae Chong Boyko age 59 of Clarksville ,passed away on Saturday May 20, 2017 at Tennova Healthcare. She was born August 25, 1957 in Kyong Nam-Do, Korea the daughter of the late Chong Yol and Pak Tuk Sun.

Tuae has worked for many years at Blanchfield Army Community Hospital at Ft. Cambbell in the custodial department. She was a member of the United Church, she enjoyed working in her garden and finding ginsing. She was primarily a devoted and loving mother and grandmother who loved the Lord and would say this time means "see you later" and not "goodbye".

Memorial services will be conducted on Tuesday May 23, 2017 at the Chapel of Gateway Funeral Home at 6:00 P.M. Visitation will be held on Tuesday from 4:00 P. M. until the time of services. Arrangements are under the care of Gateway Funeral Home and Cremation Center 335 Franklin Street Clarksville, TN 37040. Phone 931-919-2600. Online condolences may be made by going to www.gatewayfh.com

To order memorial trees or send flowers to the family in memory of Tuae Chong Boyko, please visit our flower store.