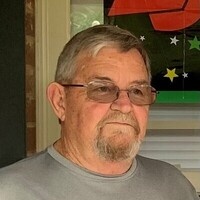 Tommy D. Byard, age 74, of Clarksville, TN, passed away on Wednesday January 26, 2022 at Tennova Healthcare in Clarksville.  He was born February 2, 1947 in Montgomery County, TN, the son of the late Marvin Harrison Byard and Nannie Mae Smith Byard.  He is a graduate of Montgomery Central High School and he attended Austin Peay State University.  Tommy served his country in the US Army for two years during which time he was stationed in Germany.  During his working life he was with Trane Corporation for 14 years and with UPS for 15 years.  He last was with Byard Construction until his health no longer permitted him to work.  Tommy is a member of Pleasant View Baptist Church.  He was proud to be a part of the Palmyra Volunteer Fire Department.  In his free time he enjoyed hunting, fishing, woodworking and cooking.  Left to cherish his memory is his wife of 52 years Mary Edwards Byard, his son Dwight Byard (Kaye) of Cunningham, and his daughter Pamela Byard Johnson of Clarksville.  Also surviving are brothers Danny Byard (Judy) of Clarksville, and Bobby Byard (Shirley) of Clarksville.  He is blessed with five grandchildren, Brittany, Courtney (Rich), Dakota, Hope, Will, and three great grandchildren. Briella, Henry, and Holley Jo. Tommy also leaves behind his beloved dog, Hank. In addition to his parents he is preceded in death by brothers James Harrison Byard, and Carlos Byard, and sisters Peggy Black, Mary Stanley, Shirley Gelia, and Donna Rider.  Funeral services will be conducted on Sunday January 30, 2022 at 2:00 PM at Gateway Funeral Home with Brother Joel Nulty officiating.  Burial will follow at Resthaven Memorial Gardens. Pallbearers will be members of the Palmyra Volunteer Fire Department.  Visitation will be from 12 noon until the time of services on Sunday at the funeral home.  Arrangements are under the care of Gateway Funeral Home and Cremation Center  335 Franklin Street  Clarksville, TN  37040.  Phone 931-919-2600.  Online condolences may be made by going to www.gatewayfh.com

To order memorial trees or send flowers to the family in memory of Tommy D. Byard, please visit our flower store.