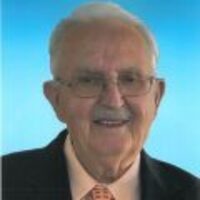 Ray P. Russom, 89, traveled to his heavenly home on May 29, 2019 after a long and healthy life. His devotion to his family and his firm belief in God supported him in his final days and ultimately gave him peace. Ray was born in Bethel Springs, Tennessee on August 8, 1929 to the late Rayford P. and Margret E. Russom, a Savannah, Tennessee businessman and a homemaker respectively. He is preceded in death by his brothers, J.D. and William Russom; his sisters, Nola Paulk and Evie Lou Russom; and his first wife, Jane Russom. He followed in his father's entrepreneurial footsteps and founded Rayco Auto Electric Service in Memphis, Tennessee which he owned for more than 25 years. He was a long-standing member of the Church of the Nazarene and an avid cook, fisherman, gardener, and golfer.

A Celebration of Life will be held on Saturday June 1st, 2019 at 2:00 PM at Gateway Funeral Home Chapel, with visitation beginning at 11:00 AM. Dr. James Russom, Rev. Duane Houston (retired), and Rev. Charlotte Moore will be officiating services at 2:00 PM with a burial immediately following at Rye's Chapel United Methodist Church.

In lieu of flowers, the family requests donations to Nazarene Compassionate Ministries (https://give.nazarene.org/donate/f/105945). Arrangements are under the care of Gateway Funeral Home and Cremation Center; 335 Franklin St Clarksville Tn 37040; Phone 931.919.2600

To order memorial trees or send flowers to the family in memory of Ray Russom, please visit our flower store.