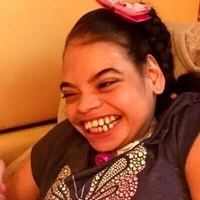 Nakia Marie Lewis, age 15, passed away in her mother’s arms Monday, February 22, 2021 at Vanderbilt Children’s Hospital. Nakia was born in Nashville, TN on October 6, 2005 and soon after met her forever mother, Sandra Lewis. Nakia was born with Dandy Walker Syndrome. She spent a lot of time at Vanderbilt’s Children Hospital. Although she suffered with this disability, it did not stop Nakia from being a determined, feisty and loving child. She was a warrior through her life, never allowing her disability to stop her. In her short 15 years of life, Nakia touched the lives who God ordained she encounter.  She loved to snuggle, be read to and watch Barney and Dora. She also enjoyed nursery rhymes, they made her very happy. Nakia had a fascination with Belle from Beauty and the Beast. Nakia was also blessed with Andrea and Robert Odom, who were like her second parents. They have been beside her, and her mother, Sandra during these trying times.

There will be a memorial service held at a later date.

Arrangements are under the care of Gateway Funeral Home & Cremation Center. 335 Franklin Street Clarksville, TN 37040. Phone: (931)919-2600. Online condolences may be made by visiting our website, gatewayfh.com

To order memorial trees or send flowers to the family in memory of Nakia Marie Lewis, please visit our flower store.