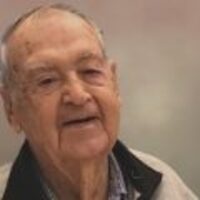 Maurice Martin Cleveland was born August 11, 1926 in Anthony, Kansas; son of Lynn Joseph and Esther Elizabeth (Potter) Cleveland. He grew up in Anthony, graduating from Anthony High School. Maurice began his career with the Santa Fe Railroad immediately following high school. On October 16, 1945, he was inducted into the United States Army Air Corp. He served during the end of World War II and attained the rank of Sergeant in the 621st Aircraft Control and Warning Squadron. He was honorably discharged on March 16, 1947. He then returned home and went back to work for the railroad making it his life-long career. On June 25, 1950, Maurice was united in marriage with Jean Smith at the Christian Church in Anthony. They moved to Medicine Lodge where they were blessed with two children: Jan and Martin.

In 1964, Maurice's career with the Santa Fe Railroad moved his family to Amarillo, Texas. After retiring from the railroad, they would return to Anthony frequently for stays. Maurice was a past Master Mason of the Syland 77 Masonic Lodge in Medicine Lodge, Kansas, and a member of the Anthony Lodge 200 in Anthony, Kansas. He was a committed Christian. He loved his family, his church, his dogs, the outdoors, and singing beautiful music. He especially enjoyed singing in his church choir. He always put his hand out to help others. He was a loving and devoted husband and father. A hard worker and a man of honesty, scrupulous ethics, courage, and determination. He took pride in his family and everything he did in life.

Jean, the love of his life, passed away on July 18, 2012, after sixty-two sweet years of marriage. Following Jean's death, Maurice remained in their family home in Amarillo until October of 2018, when he moved closer to his son's home in Clarksville, Tennessee.

On March 20, 2019, Maurice passed away in Clarksville, Tennessee at the age of ninety-two years, seven months and nine days. He was preceded in death by his parents, his wife, and one brother, Gene Cleveland. Maurice will be deeply missed by his son, Martin Cleveland and daughter-in-law, Rachel; his daughter, Jan Cleveland; four grandchildren: Michael, Daniel, Cecilia and Sophia; and a host of other relatives and friends.

Visitation will be held 3:00 p.m. to 7:00 p.m. Tuesday, March 26th, at Prairie Rose Funeral Home in Anthony. Graveside service will be held 11:30 a.m. Wednesday, March 27, 2019 at Spring Grove Cemetery, west of Anthony, with Military Honors and Masonic Rites. Memorials in memory of Maurice may be made to the Christian Relief Fund or to your favorite charity and may be sent in care of the funeral home. Prairie Rose Funeral Homes, 602 E. Main St., Anthony, KS 67003, is in charge of arrangements. www.prairierosefuneralhomes.com

To order memorial trees or send flowers to the family in memory of Maurice Martin Cleveland, please visit our flower store.