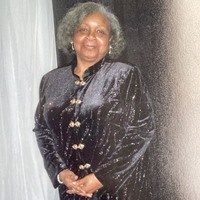 Our Matriarch Mary Louise (Wolf)-Baker was born on November 12, 1943, in Cincinnati Ohio, to the Union of the late Charles William Wolf Sr. and Mary Jane Wolf.

At an early age, she enjoyed singing in the choir at the First Baptist Church of Cumminsville. She was known to family and friends as Mary Lou or Lou. Before entering the workforce, Lou was a loving wife to Terrence DeWitt Jacobs Sr. and a stay-at-home mother to their 5 children. After the dissolution of their marriage, Mary and Wayne A. McKeller became companions for over 10 years and they welcomed her youngest son, Lamar. Mary then met Travis Baker and they wed in Clarksville Tennessee until the
dissolution of the union. She remained single spending all her love on her children, grandchildren, and other children and young adults in the neighborhood. Lou always had an open heart and an open house for all that were in need.

She has been retired for years. Before retiring Mary Louise (Wolf)-Baker worked for the Red Cross in Hopkinsville Kentucky as a resource liaison for fire victims, the indigent population, and DCS. She also worked as a machinist for 10 years at Frigidaire in Springfield Tennessee and prior to moving to Tennessee in 1992, Mary Lou worked for Mikart Pharmaceuticals as a machinist.

Mary Louise Baker departed this earthly life on July 2, 2022. She will be united with our Heavenly Father where there will be no more pain and suffering nor sorrow. She walks on streets paved in gold and uses her angelic voice to sing songs of praises in the Heavenly choir while watching over all her many decedents.

At the end of life, Mary Lou spent her life nurturing and loving on her family. Being the oldest child of five, she was a mother to her siblings, nieces, nephews, children, grandchildren, great and great-great-grandchildren. She would always say that she needed the pain to go away and would tell the doctors to fix me because I have a lot more work to do. This is the true heart of a Matriarch and Mother.

A memorial service will be held at Gateway Funeral Home on Saturday, July 16, 2022, at 1:00 P.M. with visitation for one hour prior. Pastor Larry D. Maclin will officiate the service.

To order memorial trees or send flowers to the family in memory of Mary Louise Baker, please visit our flower store.