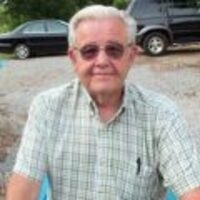 Marvin E. Rye age 72 of Erin, TN, passed away on Sunday November 12, 2017 at his home, surrounded by his family. He was born in Houston, County on August 24, 1945 and has been a lifelong resident. Throughout his life Marvin has been involved in the heavy equipment business both in operation and sales. He is a member of Griffins Chapel Church of the Nazarene as well as being a member of the Masonic Lodge. He is survived by his wife Frances "Frankie" South Rye of Erin; daughters Donna Louise Bryant (Randy) of Erin; and Crystal Nicole Rye (Ron) of Savannah, TN; step sons Anthony Wayne Cottrell of Nashville; and Rickey Earl Cottrell (Kathy) of Hermitage, TN; a brother Ricky Rye (Tina) of Erin; sisters Katherine Schmidt (Louis) of Tennessee Ridge, TN; and Anita Wyatt (Travis) of Tennessee Ridge, TN; grandchildren Heather Jones, Tiffany Lynn Cottrell, Michael Bryan Parman, Brittany Parman, Anna Bryant, Dustin Bryant, and Thaden Bryant; as well as two great grandchildren Avery Jones and Cooper Jones. Marvin is preceded in death by his parents Buford J. Rye and Annie Louise Nichols Rye; a brother Gerald Rye; and a sister Bonnie Clark. Memorial services are planned for 2:00 P.M. on Saturday November 18, 2017 at the Griffins Chapel Church of the Nazarene. The family will receive friends for the hour prior to services at the church. In lieu of flowers, memorial contributions may be made to the Outreach Ministries of Griffins Chapel Church of the Nazarene 120 Hwy 46N Erin, TN 37061. Arrangements are under the care of Gateway Funeral Home and Cremation Center 335 Franklin Street Clarksville, TN 37040. Phone 931-919-2600. Online condolences may be made by going to www.gatewayfh.com.

To order memorial trees or send flowers to the family in memory of Marvin E. Rye, please visit our flower store.