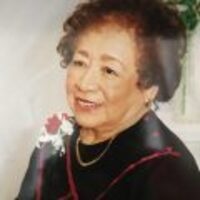 Lucia McDonough age 93 of Clarksville, went home to be with the Lord on Tuesday May 7, 2019 at her residence. She was born July 6, 1925 in Hutchinson, Kansas, the daughter of the late Juan and Damacia Amaro. Lucia worked for over 30 years in sales with Avon. She was a member of the Presidents Club. She is a member of Immaculate Conception Catholic Church. She was a faithful member of the Ajax Turner Senior Center and had been a member of the Red Hat Society. She loved to dance and for many years she managed the concession stand at the Northwest Little League. She is survived by her daughters, Rose Moore (Joey) of Clarksville; Lisa Meadows (Bill) of Winston Salem, NC; and Terry Wrenn (Rosser) of Richardson, TX; and her son Michael McDonough (Lynn) of Dallas, TX. Also surviving are sisters Mona Marquez (Pete) of Hutchinson, KS; Mary Quinn of Wichita, KS; Rose Johnson (Harry) of Kinsley, KS; and Cecelia Raya of Hutchinson, KS. Also surviving are seven grandchildren and three great grandchildren and many nieces and nephews. In addition to her parents, Lucia is preceded in death by her husband Lawrence who passed in 1994, her son Larry McDonough and a granddaughter Shannon Meadows Moran. Also preceding are brothers Edward, Rayes, Manuel, and Alfonso Amaro, and a sister Lina Rodriguez. The Mass of Christian Burial will be conducted on Saturday May 25, 2019 at 1:00 P.M. at Immaculate Conception Catholic Church. Burial will follow at Resthaven Memorial Gardens. Visitation will be on Friday May 24, 2019 from 4-7 PM at Gateway Funeral Home and for one hour prior to services at the church. Arrangements are under the care of Gateway Funeral Home and Cremation Center 335 Franklin Street Clarksville, TN 37040. Phone 931-919-2600. Online condolences may be made by going to www.gatewayfh.com. .

To order memorial trees or send flowers to the family in memory of Lucia McDonough, please visit our flower store.