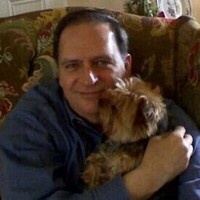 John Russell Meacham Jr, age 73, of Clarksville, TN, passed away on Thursday, May 6, 2021 at Tri-Star Centennial Medical Center in Nashville.  He was born February 9, 1948 in Clarksville, the son of the late John Russell Meacham, Sr. and Bernice Etheridge Meacham.  John is a 1966 graduate of Clarksville High School and earned a BS degree in marketing at Austin Peay State University in 1970.  He enjoyed a 40-year career as an account executive in the footwear industry with various companies including Acme Boot, Rockport, Birkenstock, Sperry, Frye, Earth Footwear and Samuel Hubbard.  In his early time with Acme Boot, he began a marketing relationship with the Grand Ole Opry of which he was proud.  During his career he earned many sales awards while covering territory in the southeast part of the country.  He was involved with the Clarksville High School Alumni Football Association, as he had played football in  high school and was the team co-captain.  He was also active in the Austin Peay Alumni Association.  John is a member of First Baptist Church and a member of the Ron Samuels Sunday School Class.  His greatest love was his family and his love of caring for “his girls” and going to plays, musical concerts, and trips with them.  Left to cherish his memory is his wife of 52 years, Karen Vickrey Meacham of Clarksville; his daughter Jenny Elizabeth Meacham of Clarksville;  his granddaughter Lennon Elizabeth Meacham.  To Lennon, John was known as “Big Daddy”.  John is also survived by his sister, Janice Meacham Bisson (Don) of Huntsville, AL as well as a niece, LeAnn Bisson Bing and a nephew, Mark Stanley. In 1968, John became a member of the Vickrey family, who all love him dearly.  Graveside memorial services will be conducted on Friday, May 14, 2021 at 2:00 PM at Greenwood Cemetery with Rev. Pat Van Dyke officiating. Memorial contributions may be made to the Austin Peay Alumni Association or to First Baptist Church.  Arrangements are under the care of Gateway Funeral Home and Cremation Center  335 Franklin Street  Clarksville, TN  37040.  Phone 931-919-2600.  Online condolences may be made by going to www.gatewayfh.com.

To order memorial trees or send flowers to the family in memory of John Russell Meacham Jr., please visit our flower store.