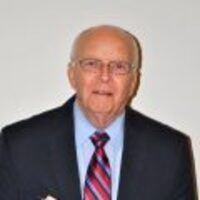 Pastor Jerry E. Lucas age 79 went home to be with the Lord on Sunday November 22, 2020 at his residence. He was born September 5, 1941 in Albermarle, NC, the son of the late James Lucas and Virginia Honbarrier Lucas. Jerry was a devoted Christian and Pastor. In his earlier years he received his electronics engineering degree and was employed at General Electric at Lynchburg, VA. In 1976 he received the call to the ministry and soon received his Masters of Divinity degree. In 1980, working closely with Dr. & Mrs. Robert Hughes, they planted and pastored the Cross and Crown Baptist Church in Pensacola, FL. While in Pensacola, Jerry worked for a computer business as well as teaching at the Pensacola Christian College. He served the Church in Pensacola until he came to Clarksville, TN in 2002 where he assisted in the planting of the Cross and Crown Baptist Church in Clarksville. While serving in Clarksville, he was especially active in Soul Winning and the Senior Saints program. While in Clarksville, Jerry and his wife made and sold Lucas Barbecue Sauce which was available in stores in the Middle Tennessee area. Left to cherish Jerry's memory is his wife Myra Whitley Lucas of Clarksville; four daughters Kim Caldwell (Pastor Craig) of Clarksville; Debbie Davis (Pastor Joe) of Walnut Hill, FL; Natalie Lucas of Clarksville; and Kelly Whitaker (Frank) of Pleasant View,TN. Also surviving are two sisters Brenda Mauldin of Albermarle, NC; and Wanda Gilbert (Kenny) of Badin, NC. Jerry is also blessed with 16 grandchildren and 5 great grandchildren. Funeral services will be conducted on Saturday December 5, 2020 at 11:00 AM at the Cross and Crown Baptist Church 1220 Hazelwood Road, Clarksville, TN. Pastor Craig Caldwell will officiate. Visitation will be at the church from 9 AM until the time of services on Saturday. Graveside services will be on Monday December 7, 2020 at 10:00 AM at Fairview Memorial Gardens in Albermarle, NC. Arrangements are under the care of Gateway Funeral Home and Cremation Center 335 Franklin Street Clarksville, TN 37040. Phone 931-919-2600. Online condolences may be made by going to www.gatewayfh.com.

To order memorial trees or send flowers to the family in memory of Jerry E. Lucas, please visit our flower store.