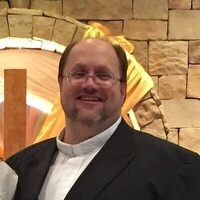 Rev. Jeffrey Kent Lott age 57, of Clarksville, TN, went to the arms of his Lord on January 13, 2021 at Vanderbilt University Medical Center in Nashville.  He was born April 1, 1963 in Shreveport, LA, the son of the late Howard V. Lott and Doris Nelson Lott Stoll.  Jeff is a graduate of the Columbus College of Art and Design, and earned a BS degree at Ohio State University.  He then earned a MA degree at Princeton Theological Seminary and an additional MA degree at Lutheran Theological Seminary at Philadelphia.  He has served various Lutheran congregations during his career including, Lutheran Church of Our Savior in Richmond, VA; First English Lutheran Church in Wisconsin Rapids, WI; Muddy Creek Lutheran Church in Denver, PA.  He came to Clarksville, TN in July 2003 and has served as the Pastor of Christ Lutheran Church until the present time.  Left to cherish his memory is his wife Richelle Ash Lott of Clarksville; sons Brent W. Smith of Clarksville; and Nathaniel J. Lott of Clarksville; and his daughter Marissa R. Lott of Clarksville.  He is survived by his brothers John Lott of Sparks, NV; Ron Lott of Madison, WI; Daniel Lott of Las Vegas, NV; and Scott Stoll of Reno, NV. He has touched the lives of many people including parishioners and friends.   He also loved his dog, Howard.  Memorial services will be conducted on Saturday January 23, 2021 at 11:00 AM at Christ Lutheran Church  2425 Kirkwood Road, Clarksville, TN.  Due to covid considerations, the service will be livestreamed on the church Facebook page and people are encouraged to attend the service virtually.  Arrangements are under the care of Gateway Funeral Home and Cremation Center  335 Franklin Street  Clarksville, TN  37040.  Phone 931-919-2600.  Online condolences may be made by going to www.gatewayfh.com.

To order memorial trees or send flowers to the family in memory of Jeffrey Kent Lott, please visit our flower store.