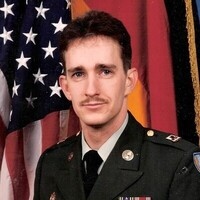 Jeffery Allen Rousseau of Clarksville, TN passed away Monday, October 18, 2021 at Vanderbilt University Medical Center in Nashville, TN, while surrounded by his wife and 4 of his children. Known as Jeff to his parents, siblings, and extended family, and Allen to his wife, children, and friends, he was born on May 4, 1962 in Dallas, TX to Sammy L. and Carole L. Rousseau. At the age of 4, Allen and his younger sister Karen were sealed to their parents. He was later baptized at the age of 8. Allen grew up within The Church of Jesus Christ of Latter Day Saints, later serving in the bishopric in Germany and branch presidency in Clarksville, and many other callings throughout his lifetime. Allen was sealed to his wife and 2 children at the time many years later while serving the Army in Germany. Allen was a fiercely patriotic and dedicated solider. He willingly served his country for over 27 years in the U.S. Army; 10 years on active duty as a mechanic; and over 10 in the Army Reserves as an MP. His military career spanned 4 presidencies. Allen was obsessed with photography. He had many accessories to better accommodate his hobby to its fullest. Allen loved his wife, children, and grandchildren, and made friends wherever he went.Left to cherish his memory is his wife of 37 years, Dianna J. Rousseau of Clarksville, TN; eldest and only daughter, Angel D. Rousseau of Clarksville, TN; sons, eldest Ivan J. Rousseau (Katie) of Clarksville, TN, twins Gustavio G. Rousseau of Clarksville, TN, Filipe A. Rousseau (Evie) of Clarksville, TN, and youngest Zacharias C. Rousseau of Clarksville, TN; sisters, Karen Butcher of Dallas, TX and Michelle Rousseau (Steve) of Dallas, TX; brothers, Henry Rousseau (Alice) of Dallas, TX, and Barry Rousseau (Beth) of Wichita, KS; grandchildren, Natalya, Hailey, Alexandra, Mallekai, Micah, and Millo who is expected next year. Allen is also survived by honorary daughters, Alana McLeroy and Felicia Wood; honorary son, Mar’Kell Pipes, and several nieces and nephews.Allen is preceded in death by his parents, his father and mother-in-law, and several beloved aunts and uncles.There will be a military service with honors at the Kentucky Veterans Cemetery West (5817 Fort Campbell Blvd, Hopkinsville, KY 42240) on Friday, November 12, 2021 promptly at 11:00 am CST. Immediately following there will be a celebration of life at The Church of Jesus Christ of Latter-day Saints at 3242 Highway 41A South, Clarksville, TN 37043 (often referred to as the Sango or South building).Arrangements are under the care of Gateway Funeral Home & Cremation Center. 335 Franklin Street Clarksville, TN 37040. Phone: (931)919-2600. Online condolences may be made by visiting our website, gatewayfh.com.

To order memorial trees or send flowers to the family in memory of Jeffery Allen Rousseau, please visit our flower store.