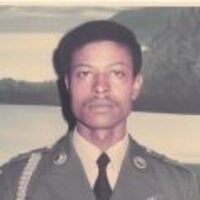 James A. Pepper age 73 of Clarksville, passed away on Friday March 26, 2020 at his residence. He was born February 24, 1947 in Vaughan, MS, the son of the late John J. Pepper and Luella Dory Pepper. His early education was obtained in the Yazoo County Public Schools of Vaughan, Mississippi. After graduation from high school he joined the Army. James served his country in the US Army for over 20 years. During his time in the service he received a Bronze Star. James loved working with his hands. Following his time in the military, James worked for several years with the Riverside Correctional Center. He is a member of the American Legion. He departed this life March 26, 2020 and leaves to mourn his homegoing, five brothers, Curtis Pepper (Sandra) of Jackson, MS; John Pepper of Jackson, MS; Otha Pepper of Vaughan, MS; Jerry Pepper (Hattie) of Chicago, IL; and Thomas Pepper (Maria) of Ridgecrest, CA; Also surviving are eight sisters, Ethel Jean Jones, Los Angeles, CA; Mary Ella Coleman, Hattiesburg, MS; Thelma Johnson of Ruleville, MS; Zelma Pepper of Kansas City, MO; Emma Jean Washington (Leon) of Ridgeland, MS; Rachel Pepper of St Louis, MO; Alice Pepper of St Louis, MO; and Linda Pepper of St Louis, MO. He is also survived by many relatives and friends and a host of nieces and nephews. In addition to his parents, he is preceded in death by his wife Magdalena Ingle Pepper. Graveside funeral services with military honors will be conducted on Thursday April 2, 2020 at 11:00 AM at Resthaven Memorial Gardens. Arrangements are under the care of Gateway Funeral Home and Cremation Center 335 Franklin Street Clarksville, TN 37040. Phone 931-919-2600. Online condolences may be made by going to www.gatewayfh.com.

To order memorial trees or send flowers to the family in memory of James A. Pepper, please visit our flower store.