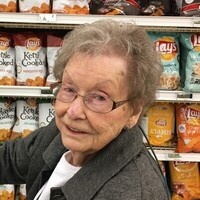 Hazel W. Strebe age 95 of Millington, TN, passed away on Saturday January 16, 2021 at Methodist Hospital North in Memphis, TN.  She was born March 11, 1925 in Hendersonville, TN, the daughter of the late John Woods and Eula Huffine Woods.  Hazel was a homemaker and was devoted to her family. In addition to her parents, she is preceded in death by her husband Clifford S. Strebe who passed in 1998.  Survivors include her daughter Mona Kenley (Roger) of Atoka, TN; her sons Thomas M. Williams (Wanda) of Bowling Green, KY; and Gary Strebe (Pam) of Murfreesboro, TN.  Hazel is also blessed with five grandchildren, Connie Cain, Kim Delles, Paul Strebe, Mendy Patterson, and Josh Kenley, as well as seven great grandchildren and two great great grandchildren.  Graveside funeral services will be conducted on Tuesday January 19, 2021 at 1:30 P.M. at Resthaven Memorial Gardens in Clarksville, TN. Arrangements are under the care of Gateway Funeral Home and Cremation Center  335 Franklin Street  Clarksville, TN  37040.  Phone 931-919-2600.  Online condolences may be made by going to www.gatewayfh.com.

To order memorial trees or send flowers to the family in memory of Hazel W. Strebe, please visit our flower store.