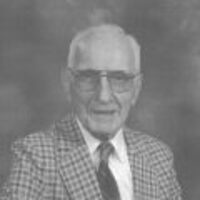 Harry Richard Ballou, 99, died peacefully at his residence in Clarksville, TN on November 12, 2018. He was born on October 20, 1919 in Terre Haute, IN as the only child of the late Harry David Ballou and Virginia Leach Ballou. He graduated from Terre Haute Gerstmeyer High School in 1937 and worked at Quaker Maid Company, a subsidiary of A and P Foods, as a fork lift operator from 1939 until the plant closure in 1979: interrupted by his World War II military service from 1942-1945 as a printers mate aboard the battleship, USS North Carolina. Harry was aboard the North Carolina anchored in the Bay of Tokyo at the time of signing of the surrender of Japan. He married Dorothy Klaus in 1961, they had no children and she precedes him in death. A product of the great depression and World War II; Harry was the ever dutiful son and husband, patriot, and the quiet compassionate, hardworking man that exemplified his generation. He was always kind to all and still thoughtful and contemplative of life until his passing. He enjoyed gardening and yard work, genealogy and automobiles. He was a life member of VFW Post 972, Terre Haute, IN, a member of St. Mark's United Church of Christ also in Terre Haute and was recently inducted into the Valentine Sevier Chapter of the Tennessee Sons of the American Revolution. Harry was a life long resident of the Terre Haute area until his move to Clarksville, TN in 2011 to be closer to his family. He is survived by his cousins-Daniel (Alicia) Reisner of Carrolton, KY, Beth (Ron) Heiby of San Jose, CA and Priscilla (Tim) Roads of Clarksville, TN and their children as well as his many friends at Fieldstone Place in Clarksville. A memorial service will be held at St. Mark's United Church pf Christ, 475 South Fruitridge Ave, Terre Haute, IN at 10 AM on December 22, 2018 with visitation to begin at 9 AM that morning and interment at Roselawn Cemetery immediately following his memorial. Arrangements are under the care of Gateway Funeral Home and Cremation Center, Clarksville, TN.

To order memorial trees or send flowers to the family in memory of Harry Richard Ballou, please visit our flower store.