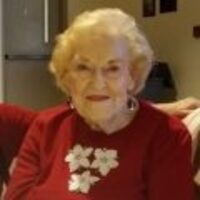 Gloria Mary Bedingfield, age 95, of Clarksville, TN formerly of Nashville, TN for almost 70 years, passed away on Friday, July 10, 2020 at home. She was born on September 9, 1924 in Keene, New Hampshire to the late Angelo and Annie Joyce.

Gloria worked as a Postal Worker at Vanderbilt University Station B Post Office before retiring in 1989. However, during WWII, she left high school prior to her senior year, in Waltham, MA, to work in a local machine shop for the war effort. She also met her husband of 49 years, James Bedingfield while his ship was docked in the Boston Navy Yard. After moving to Nashville with "Jimmie", she was a member for 65 years at the St. Edward Catholic Church in Nashville. She had a wonderful sense of humor and was known for saying the catch phrase "Mama Mia!" quite often. Gloria would literally stop and "smell the roses", or comment about every little thing she when getting out of the house. She really did enjoy everything life had to offer her. She took pride in her appearance and loved to go shop at thrift stores and yard sales. Having her lipstick on wherever she went was a must, even when she transferred from the hospital to rehab! She was an animal lover all her life and she was an avid John Wayne fan and had seen all his movies several times over.

Left to cherish Gloria's memory is her daughter, Joyce Cosby and son in law, Chris of Clarksville, TN and Chris' mother, Leta ("Jo") Cosby who was a very dear friend and of course her 4 fur "grandbabies", Schluppy, Molly, Dandy and Annie. Along with her parents, Gloria was preceded in death by her husband, James Bedingfield; brothers, Rollins and Ralph Joyce; sister, Emily (Joyce) Peluso; and very close sister in laws who claimed her as their sister, Gertie Newman, Verta Miller, Gladys Pratt and Edra Vaughn.

Due to the current Covid 19 concerns, there will be no public services at this time but a graveside service will be held in Nashville at a later date. Arrangements are under the care of Gateway Funeral Home and Cremation Center; 335 Franklin Street Clarksville, TN 37040; Phone 931-919-2600. Online condolences may be made by visiting gatewayfh.com

To order memorial trees or send flowers to the family in memory of Gloria Mary Bedingfield, please visit our flower store.