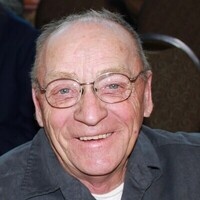 George C. Wine Jr. age 81, of Trenton, KY, passed away on Monday January 31, 2022 at his residence.  He was born June 19, 1940 in Wheatland, VA, the son of the late George C. Wine Sr. and Carrie Lee Wine.  George worked for many years at Dulles and Washington National Airports in Washington DC.  He was a mechanic for the various vehicles and equipment needed at the airport.  He retired in 2004.  George was a member of the Apostolic Lighthouse Church in Clarksville.  He enjoyed mowing grass and repairing vehicles and lawnmowers for others.  He enjoyed being able to help other people.  He is survived by his wife Janice Fay Hoffman Wine of Trenton, KY.  Also surviving are children Sherrie Miller (Wayne) of Carneysville, WVA; Penny Grimes (JR) of Charlestown, WVA; and Shelly McBride (Ron) of Lynchburg, VA; and step children Paul E. Dixon III (Kelley) of Clarksville; Carl Lee Dixon of Laurel, MD; and Brian Eugene Dixon (Beth) of Lancaster, PA.  Also surviving is a daughter in law Laura Dixon of Myrtle Beach, SC and a brother Danny Wine of Georgia, and sisters Shirley Wine of Virginia Beach, VA; and Myrtle Gladwin (Harry) of Ocean City, MD.  George is also blessed with 19 grandchildren and 11 great grandchildren.  In addition to his parents, he is preceded in death by his son Scott Anthony Wine, and a step son Michael A. Dixon, as well as a brother Robert Wine and a sister Bonnie Wine. There are no public funeral services planned at this time.  Arrangements are under the care of Gateway Funeral Home and Cremation Center  335 Franklin Street  Clarksville, TN  37040.  Phone 931-919-2600.  Online condolences may be made by going to www.gatewayfh.com.

To order memorial trees or send flowers to the family in memory of George C. Wine Jr., please visit our flower store.