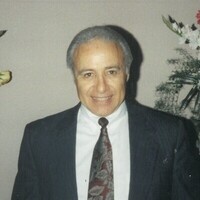 George William Frentzos, age 83, of Clarksville, TN, formerly of New Orleans, LA, passed away on Thursday September 30, 2021 at his residence.  He was born March 3, 1938 in Sparta, Greece, the son of the late William Frentzos and Angelina Kakas Frentzos.   He earned his Masters Degree from Loyola University.  For 32 years he was with the YMCA in New Orleans, retiring as the executive director.  He was proud of his work with the YMCA and the impact he had on many young people.  He was active in organizing the Junior Leaders Club and enjoyed the annual mountain retreat held to teach leadership skills to young people.  In addition, he and his wife taught Greek dancing to the young people while at the retreat.  He was very athletic and was an excellent handball player as well as basketball and soccer and was a fisherman.  He is a member of The Church of Jesus Christ where he served as a deacon.  Left to cherish his memory is his wife Marlea Bucci Frentzos of Clarksville; his sons Christos Frentzos (Jan) of Clarksville and Andreas Frentzos (Vanessa) of New Orleans.  He is also survived by three grandchildren Dominic Frentzos, Vincent Frentzos, and Alivia Frentzos as well as many friends and extended family.  In addition to his parents, he is preceded in death by his sister Harriet Liavas.  A celebration of George’s life will be held in the spring in New Orleans.  Arrangements are under the care of Gateway Funeral Home and Cremation Center  335 Franklin Street  Clarksville, TN 37040.  Phone 931-919-2600.  Online condolences may be made by going to www.gatewayfh.com.

To order memorial trees or send flowers to the family in memory of George William Frentzos, please visit our flower store.