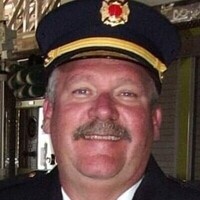 Gary Lee Coplen, age 69, of Clarksville, TN, passed away on Tuesday February 1, 2022 at his residence.  He was born September 17, 1952, the son of the late Lewis Imes and Nell Chester Woods.  Gary served his country in the US Air Force.  He worked on Ft. Campbell for many years as a member of the Ft. Campbell Fire Department, retiring as the Ft. Campbell Fire Inspector.  He had also worked for many years on post as a heating and air conditioning technician.  He was known in the area as a musician, playing in various bands including West Winds and 2’s Enuff.  He played bass guitar and sang.  He is also a member of the Masonic Lodge and the Shrine.  He is survived by his wife Kathy Hill Coplen of Clarksville; daughters Michelle Lee Coplen Majors (Michael) of Clarksville and Christina Marie Williams (Michael) of Clarksville and step children Amanda Freeman Mitchell (Timothy) of Dover and Jason Freeman (Joanne) of Clarksville.  Also surviving are siblings Randy Imes (Bonnie) of Warren, OH; Kimberly Coplen of Clarksville; and Cindy Stiffler (Les) of Warren, OH. Gary is blessed with seven grandchildren, Daphnie Freeman, Devin Hall, Chelsea Fair, Kaylei Williams, Michael Williams III,  Tanner Bingham and Lesette Guinn (Clede) as well as four great grandchildren Jashuan Rutledge, Julio Merriweather Jr, Amelia Guinn, and Palmer Guinn.  In addition to his parents he is preceded in death by his sister Sandra Hensley.  Memorial services with military honors will be conducted on Saturday February 12, 2022 at 3:00 PM at Gateway Funeral Home with Pastor Larry Robertson officiating. There will be no graveside services. Visitation will be from 1:00 PM until the time of services. Memorial contributions may be made to St Jude Hospital or he Shriners Hospital.  Arrangements are under the care of Gateway Funeral Home and Cremation Center  335 Franklin Street  Clarksville, TN  37040.  Phone 931-919-2600.  Online condolences may be made by going to www.gatewayfh.com.

To order memorial trees or send flowers to the family in memory of Gary Lee Coplen, please visit our flower store.