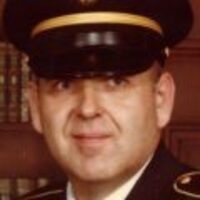 Frederick G King of Clarksville, TN passed away at the age of 80 on June 25, 2017 at Clarksville Nursing and Rehabilitation. He was born in Ionia, MI on March 29, 1937 to the late Vernon King and Norma Jones King. Mr. King went on to serve in the U.S. Army for 30 years, where he received the Bronze Star and retired as Sgt. Major. He was a member of the VFW and enjoyed working crossword puzzles and computer games. He is survived by his wife of 56 years, Mrs. Helga King of Clarksville; one son, Michael R King(Dale) of Portland, MI; two daughters, Elke Spraye(Tim) of Houghon, LA and Katherine King of Auburn, IN; one brother, Royal King of Ionia, MI; one sister, Marian Rogue of Owego, NY; and five grandchildren and one great grandchild. Mr. King is preceded in death by one brother, Walter King. Funeral Services will be held on Friday, June 30, 2017 at 11:00am in the chapel of Gateway Funeral Home. Visitation will be held on Thursday, June 29, 2017 from 5-7pm at the funeral home. Visitation will also be held from 10:00am until the hour of service on Friday. Burial with Military Honors will follow at Resthaven Memorial Gardens in Clarksville. Arrangements are under the care of Gateway Funeral Home and Cremation Center 335 Franklin Street Clarksville, TN 37040 Phone 931-919-2600. Online condolences may be made by going to www.gatewayfh.com.

To order memorial trees or send flowers to the family in memory of Frederick G King, please visit our flower store.