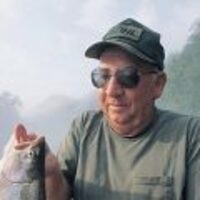 Frederick "Fred" David McClintock Jr. age 75 of Clarksville, TN, passed away on Sunday August 20, 2017 at his residence. He was born July 11, 1942 in Williamsport, PA the son of the late Frederick D. McClintock Sr. and Alice Blaker McClintock. Fred served his country for a total of six years in the U.S. Army, 2 years Active Duty and 4 years in the PA National Guard. Following his military service he operated a barber shop, later becoming a manager with Bethlehem Steel in Williamsport, PA. He later moved to Celina, TN where he became a professional fishing guide on Dale Hollow Lake. He became well known among fishermen and even appeared on several fishing TV shows. He was honored to be inducted into the National Fresh Water Fishing Hall of Fame. He was a professional fisherman for 30 years. He came to Clarksville, TN in 2009. Fred is survived by his wife Shelby Coup McClintock to whom he had been married for over 50 years. He is also survived by a son Frederick David "Mac" McClintock III & Jodi of Clarksville; two grandchildren Cameron and Andrew; a sister in law Gaynold McClintock of Montoursville, PA; and a niece Fawn McClintock. In addition to his parents he is preceded in death by a sister Rose Marie McClintock, a brother William McClintock and a grandson James David McClintock. The family would like to especially thank Asera Care, Jeanette, Vicky, and Lisa for support and care. Graveside funeral services with military honors will be conducted on Thursday August 24, 2017 at 2:00 p.m. at Resthaven Memorial Gardens with Pastor Terrell Marcom officiating. Visitation will be held on Thursday from 12 noon until 1:45 P.M. at Gateway Funeral Home. Arrangements are under the care of Gateway Funeral Home and Cremation Center 335 Franklin Street Clarksville, TN 37040 Phone 931-919-2600. Online condolences may be made by going to www.gatewayfh.com.

To order memorial trees or send flowers to the family in memory of Frederick David McClintock Jr., please visit our flower store.