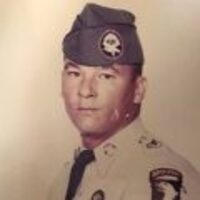 Elmero David Jr. age 86 of Auburn, AL, formerly of Clarksville, passed away on Wednesday December 20, 2017 at the Tennessee State Veterans Home in Murfreesboro, TN. He was born December 3, 1931 in New Orleans, LA the son of the late Elmero David Sr. and Anne Newchurch Prado. Elmero proudly served his country in the U.S. Army for 22 years, retiring as a Sgt. First Class. He served in Vietnam and in the 101st and 82nd divisions. Elmero is survived by a daughter Connie Tanner (Mike) of Murfreesboro and sons Elmero David III (Debra) of Woodlawn, TN; Rick David (Terri) of Rossville, GA; and Rob David of Slidell, LA. He is also survived by a half brother Augustine Prado of Marietta, GA. Elmero is also survived by 7 grandchildren Cassidy Rose David; Jeremy David; Christina Brakebill; Sara David; Jason Elrod; Justin Elrod; and Alicia David as well as 7 great grandchildren. He also leaves behind many friends including Martin and Shirley Reyes and everyone at Monarch Estates in Auburn, AL. Funeral services will be conducted on Saturday December 23, 2017 at the chapel of Gateway Funeral Home at 2:00 p.m. Burial with full military honors will be in Greenwood Cemetery. There will be a visitation time for the hour prior to services at the funeral home. Arrangements are under the care of Gateway Funeral Home and Cremation Center 335 Franklin Street Clarksville, TN 37040 Phone 931-919-2600. Online condolences may be made by going to www.gatewayfh.com.

To order memorial trees or send flowers to the family in memory of Elmero David Jr., please visit our flower store.