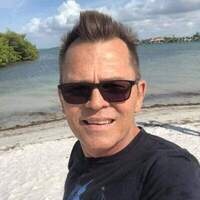 Edward Lee Taylor, born January 9, 1968 in Naples, Florida. He lived in Immokalee, Florida until he was 29, at which time he moved to Sarasota, Florida, where he lived until the final days of his life, when he went to Nashville, TN and passed away on June 29, 2022.
Edward was preceded in death by his Father, Fred Taylor of Paris, TN, his mother, Catherine Clark Taylor, of Barbersville, KY, his sister, Rebeccah Jean, of Paw Paw, Michigan, and his nephew, Derek Wyatt, of Sarasota, Florida.  He was survived by his daughter, Melissa Hernandez, of Woodstock, GA, Sandra (Rosie) Taylor, of Clarksville, TN and his brother, William Taylor, of LaBelle, FL.
Edward was a renowned and award winning hairstylist who was loved and endeared by his clients and coworkers alike. Edward was a family oriented man who was like a father to all his nieces and nephews as well as some of his younger cousins. Edward was loved by all who were blessed to be a part of his life and will be missed dearly.
A visitation will be held at Gateway Funeral Home on Tuesday, July 5, 2022 beginning at 2:00 P.M. until 8:00 P.M. There will be no services following the visitation.
Arrangements are under the care of Gateway Funeral Home and Cremation Center, 335 Franklin St. Clarksville, TN 37040. Phone: 931-919-2600. Online condolences may be made by visiting gatewayfh.com.
To order memorial trees or send flowers to the family in memory of Edward Lee Taylor, please visit our flower store.