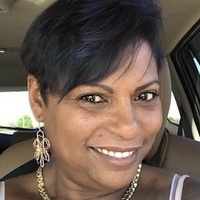 Diana Santana Robinson age 53 of Clarksville, TN, passed away on Monday March 15, 2021 at Tennova Healthcare in Clarksville.  She was born August 14, 1967 in Bronx, NY, the daughter of Mirtha Nunez and the late Manuel Santana Gaston.  While living in New York City, Diana worked as an Emergency Medical Technician.  She was raised in the Catholic Church.  She will be remembered for her generosity, kindness, and her loving selfless spirit.  She was a wonderful wife, mother, grandmother, sister and daughter.  Left to cherish her memory is her husband Kawmi Robinson of Clarksville; her daughters China Moxey, Natasha Taylor, and Iliana (Stephen) Brantley.  Also surviving are her brothers Jose Polanco, Manny Gaston and her sister Reina Infante.  She was blessed with seven grandchildren, Jonah Brantley; Jasmine Figueroa; Jayden Figueroa; Joell Brantley; Justus Brantley; July Santana Brantley; and Aiden Taylor. Also surviving is a nephew Randy Nunez, an aunt Bienvenida Nunez, and a sister in law Shaquana Robinson. Funeral services for Diana will be conducted on Saturday March 20, 2021 at 1:00 PM at Gateway Funeral Home.  Visitation will be for the hour prior to services.  Arrangements are under the care of Gateway Funeral Home and Cremation Center  335 Franklin Street  Clarksville, TN  37040.  Phone 931-919-2600.  Online condolences may be made by going to www.gatewayfh.com.

To order memorial trees or send flowers to the family in memory of Diana Santana Robinson, please visit our flower store.