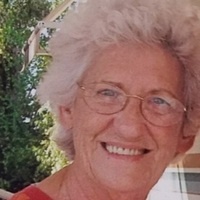 She was the 9th child born on January 22, 1936 to the late Thomas Ivan and Sadie Lee Trawick Cherry. She was born in Bear Springs, Tater Patch Holler, Stewart County, Tennessee.

Her first job was in Nashville and she would ride the Greyhound bus back and forth. That was the first example of how strong this woman was going to be in her life. She went on to become the Assistant Vice President of Dover People’s Bank sometime in the 70’s. Again, showing that a woman could work her way up in the man’s world.

When she retired, her and Bill spent a lot of time camping. They have always loved camping and took their grandchildren on camping trips when they were young. They eventually became snow birds and would leave their home in Tennessee in October and head to Florida for the winter. Coming back around the end of March or the first of April.

Join us as we celebrate Ann and her life. Celebrate her release from the chains of Alzheimer’s. Her body is healed and her mind is clear. She is home with her family now it’s time to let her know we will see her when it’s our time to join her in Glory!

A celebration of Ann’s life will be held on Friday, June 3, 2022 at 2:00 PM at the chapel of Gateway Funeral Home, with Pastor Roy Buck officiating. Visitation will be from 12:00 PM until the hour of service. Ann will be laid to rest at Hays-Hayes Cemetery in Indian Mound, TN.

Special thanks to the staff & nurses of Spring Meadows & AsceraCare Hospice Care.

To order memorial trees or send flowers to the family in memory of Anna "Ann" Belle Cherry Hayes, please visit our flower store.