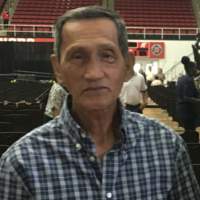 Angeles Soberano, age 79, of Clarksville, TN passed away on Monday, August 22, 2022, at Tennova Healthcare. He was born on October 2, 1942, in the Philippines to the late Maximo Soberano and Marcela Dayag Soberano.

In addition to his parents, Angeles is preceded in death by his wife, Eugenia Soberano.

No public services have been arranged.

To order memorial trees or send flowers to the family in memory of Angeles Soberano, please visit our flower store.